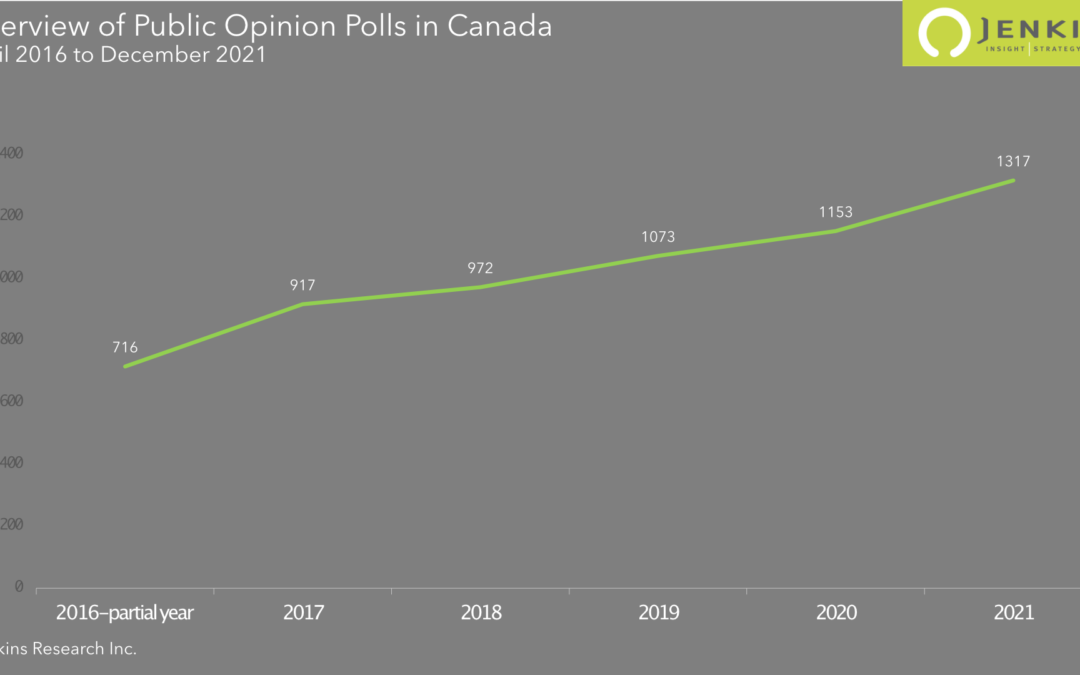 In 2020, companies and organizations released 1150 polls In 2021, that previous annual high was shattered. The 1317 polls released represents a 14% increase. There is good reason to believe the 2021 election was at least partially key to the 2021 results. As we found in 2019, the results were mostly driven by the fall federal election.

The Public Polls Project identified 1317 public opinion poll releases in Canada in 2021. The total number of polls for the past 5 full years (excluding 2016) is 5,427. In the lead up to the federal election, polling rose dramatically. Just in August and September, there were over 300 polls (23% of all polling).

There are seasonal patterns. July and August are usually quiet; the fall is the busiest.

National polls continue to dominate the publicly released polling. In 2021, the national polls remain dominant. Not much has changed since 2020. The Ontario election in 2022 may stimulate more provincial polling.

COVID-19 dominated polling in 2020. COVID was inherently a public policy issue. Compared with 2020, 2021 had fewer public policy polls and more about the election and partisan horserace. The federal election account for the higher number of electoral/political competition releases. For firms that did daily tracking, we treated each 3-4 day interval that had new data as a single survey.

If we look at national public policy polling the top category was health or pandemic. Although this is consistent with 2020, the overall share of polls categorized as health dropped significantly this year. Other notable changes in polling in 2021 include:

Back in 2017, it looked like that online research was the most likely but IVR and telephone were being widely used for publicly released polls. Between 2017 and 2020, online asserted itself as the most used survey mode. In 2021, 81% of polls were online (down slightly). The steady decline of IVR and telephone as methodologies may have finally stopped.