Unsponsored Polls in Canada: a Problem? 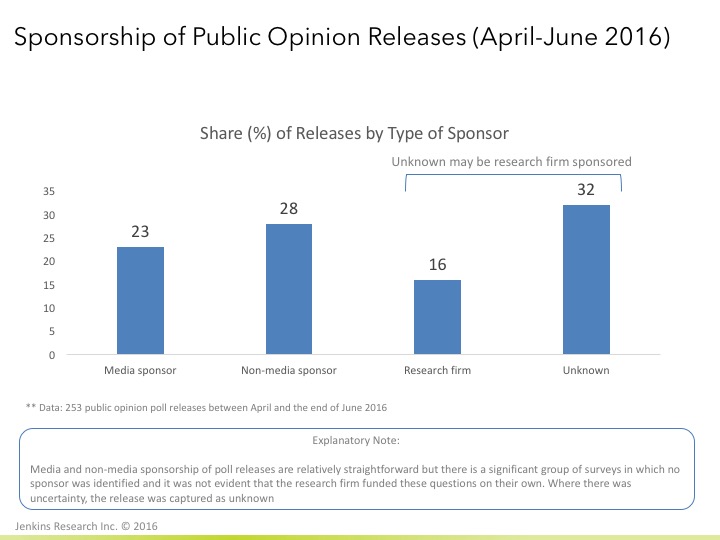 Poll sponsorship is very intriguing but a look at the database of public opinion poll releases finds a significant number of polls where no sponsor is explicitly identified.

Almost a quarter of releases (28%) were sponsored by a non-media sponsor while another 23% were sponsored by the media (e.g. CTV, Global, La press). While we do not know for certain if the media paid for the poll results, we are assuming that the media did not attach its credibility to a poll that someone else paid for.  Of the 253 releases in the past three months, 32% of them did not have an identified sponsor. This means that we cannot be certain who covered the cost of these polls.

Many polls where the sponsor has not been identified are probably self-funded by the research firm for publicity sake. In fact, 30 of the 82 such polls were about political polling and/ or government performance and these are the most likely to be funded by the firm itself.

If 30 of the 82 unknown sponsor polls are political polling, this still leaves 52 for which the public is not sure who paid for the research. As a percentage of all poll releases, this means that 21% did not have an explicit sponsor and were not about political polling or government performance. It may be that some of these were funded by the research firm itself but this is unknown.

In an ideal world, the public would have a clear sense of who decided to invest in finding out what Canadians think about the issue. A question paid for my an interest group should probably be viewed through slightly different lens than a question paid for by a research firm in an effort to generate public interest/ awareness of the company but in many cases this clarity is not evident.

About the data: All of the data reported here were collected by Jenkins Research Inc. as part of its effort to capture information about the business of public opinion polling in Canada. Best efforts have been made to be as accurate as possible.  If you are interested in the methodology, you can find the information here.